Dr Panta Murali Prasad is Associate Professor in the Department of Economic Sciences at the Indian Institute of Technology Kanpur. Dr. Prasad works in the interdisciplinary area of Law and Economics. His first book on Business, Consumer and the Government: An Economic and Legal Aspects (India and Germany) was the first of its kind in India that took a law and economics approach to consumerism. He also works on environmentalism with a focus on water resources. He has published a few papers that include Environmental and the Role of Liability and Regulatory Systems and Ganga River Resources and the Livelihood and Urban Ground Water Contamination and its Opportunity Cost to the Households. Dr. Prasad has developed and offered courses on Law and Economics and Environmental Economics at several higher educational institutions in India and has played a crucial role in the Integrated Economics Program at the Indian Institute of Technology Kanpur. He also focused his efforts on the promotion of law and economics by organizing short-term courses (Quality Improvement Program), a global initiative of academic networks, international conferences and the formation of the Indian Association of Law and Economics. 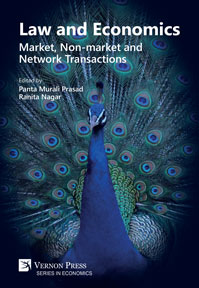