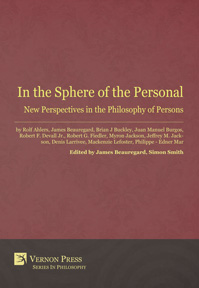 "The book reflects the style and objectives of 13th International conference on Persons: to think from the person and about the person from a unitary and pluralistic personalist tradition. The book seeks not only to look back to the past but also to the future, addressing the problems of our social context, something achieved thanks to the contributions of both young and established authors.

"The text is very rich. Along with reflections based upon classics like Freud, Nietzsche, Pringle-Pattison, Schelling, Descartes or Bergson, the effort is appreciated to address the problems of the present. Only as a sample we can mention the proposals on identity, on the origin of knowledge, the connection between neuroethics and impersonalism, the current problems posed by sexuality or the review of the dynamic tension between public and private. For this multiplicity and wealth, the book will interest all those who want to delve into the validity of the notion of person in our society"

"Simon Smith and James Beauregard had the daunting task of editing and encapsulating the varied spectrum of divergent viewpoints that structure what could be loosely called the “philosophy of persons.” On the one hand, this book certainly relishes traditional understandings of personhood, with all the consolations that a solid metaphysical grounding brings to these orthodox positions. On the other hand, the book does well not to flinch from confronting the brave new world of perspectives (e.g., Larrivee’s “Neuroethics and Impersonalism”) that have the potential to eradicate any normalized conception of “person” entirely. Here, coldly logical conclusions present themselves with frightening clarity and force: the supplantation of the human person with eugenically designed “enhanced” human specimens hearkens in the specter of an existence where basic human rights have no real metaphysical, epistemological, or ethical grounding in the transcendent.

"For the record, Simon Smith’s and James Beauregard’s introduction is, by itself, worth the purchase price of this book. For it effectively polishes the fine art of balancing a comprehensive synopsis of the book’s contents, while, at the same time, providing a logically compelling critique of any reductionist viewpoints that might eventually lead one to a Socratic absurdity. The introduction, in an admirably nuanced fashion, bravely pounces upon the blatant, self-refuting, and ironic positions that utilize self-evident, personal capacities (powers) to impotently refute the very existence of these obvious powers, or of any distinguishable, personal experiences that persist over time."

The papers in this collection were originally presented at the 13th International Conference on Persons, held at the University of Boston in August 2015. This biennial event, founded by Thomas O. Buford and Charles Conti in 1989, attracts a host of international scholars, both the venerable and the aspiring. It is widely regarded as the premier event for those whose research concerns the philosophical tradition known as ‘personalism’.
That tradition is, perhaps, best known today in its American and European manifestations, although there remains a small but fiercely defended stronghold in Britain. Personalism is not an exclusively Western development, however; its roots are also found in India, China, and Japan.
What unites these disparate intellectual cultures may seem quite small. There is little, if any, methodological or doctrinal consensus among them. They are all, however, responses to the impersonal and depersonalising forces perceived to be at work in philosophy, theology, and, most recently, the natural and political sciences. Their common aim is to place persons at the heart of these discourses, to defend the idea that persons are the metaphysical, epistemological, and moral ‘bottom line’, the vital clue to knowledge of self, reality, and all conceivable values.
The authors in this collection do not simply reflect upon this tradition, they put it to work on a range of philosophical and theological problems, both classical and contemporary; problems of free will, personal identity, and the nature of reality, as well as the very current concerns of environmental philosophers, bio- and neuro-ethicists. Their perspectives, too, are many and varied, so offer profound insights into key debates among other philosophical traditions, such as the Kantian, Hegelian, phenomenological, and process schools.

1. Personal Identity With and Without Monotheism
by Richard C. Prust

2. Integral Experience: A New Proposal on the Beginning of Knowledge
by Juan Manuel Burgos

6. The Socio-historical Ordeal of Personhood: Nietzsche and Freud
by Jeffrey M. Jackson

8. Self and Person: Distinctions in Bergson
by Robert G. Fiedler

10. The Consolation Of Philosophers: Rebuilding Dignity And Self After Sexual Assault
by Mackenzie Lefoster

11. Returning to Redemption as a Theory for Justifying Punishment
by Brian J. Buckley

12. Roma-Integration: Existential Tension Between Public Policy and the Person
by Philippe-Edner Marius

13. “We Are Not Disposable”: “Psychiatric”/Psycho-Social Disabilities and Social Justice
by Carol J. Moeller

14. Personhood in the Board Room: A Schellingian Account of Corporate Agency
by Myron Moses Jackson

Notes on the Contributors

James Beauregard is a lecturer in the psychology doctoral program at Rivier University, Nashua, New Hampshire. He teaches neuropsychology and is developing courses in Ageing and the Biological Bases of Behaviour. He is also a clinical neuropsychologist with 20 years experience working with individuals with dementia and their families. He earned his graduate degrees at Northeastern University, Boston Massachusetts and completed neuropsychology Fellowship training at Fairlawn Rehabilitation Hospital and the University of Massachusetts Medical Center and the departments of neurology and psychiatry. His research interests include Neuroethics and Personalist philosophy in both the British and continental traditions, including the intersection of these two fields in understanding personhood. He is a member of the British Personalist Forum, the American Catholic Philosophical Association, and the International Neuroethics Society.

Simon Smith fled the University of Sussex in 2007, his D.Phil. in Philosophy clutched in trembling hands. The philosophical theology of Austin Farrer was, and is, his primary subject matter; personalist metaphysics, his abiding interest. He has taught at the University of Southampton and the Modern College of Business and Science in Oman. He is now an independent scholar buried deep in the Surrey Downs. He is also Editor of Appraisal, journal of the British Personalist Forum, and writes an irregular blog for the Forum’s website. He is currently in pursuit of a more perfect alignment of science and religion through the diverse forms of personal analogy at work in modern physics and modern metaphysics. The effect of such language on the development of consciousness and on our understanding of the universe to which it belongs are his principle concerns.

Together, Beauregard and Smith are project managers and general editors of the forthcoming Internet Encyclopedia of Personalism, a peer-reviewed, open-access resource for scholars and students with an interest in the field of Personalism.