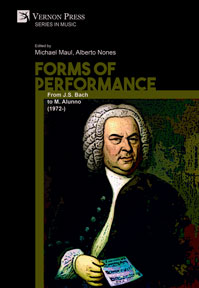 Hardback
$ 48
Availability: In stock
also in Hardback $ 36 , E-book $ 63 , Paperback $ 29
currency displayed based on your location
(click here to change currency)

Stemming from a stimulating conference, this volume provides well-researched new contributions to performance studies. It will be especially valuable to researchers of J.S. Bach's reception history and of new compositions and their performances. Importantly, the book fills a significant gap in our Anglo-centric world of knowledge as it largely focuses on events and artistic creativity in Italy and South America (esp. Colombia). Added value is the audio material that illuminates the discussions.


In this volume, the reader will find a rich diversity of scholarship all somehow linked to J. S. Bach and musical tradition. From Michael Maul's fascinating consideration of the text-painting craftsmanship in Bach's cantatas, to Alberto Nones's spell-binding discussion of the marriage of harmony and text in different settings of Leopardi's magical L'Infinito, we arrive full-circle with the demonstrated influence of Bach in Marco Alunno's challenging and exciting recently composed piano études.

Today, Bach is one of the most revered and studied figures of classical music, despite there being a time in which he was almost forgotten. Divided into two sections, this volume explores research on J.S. Bach and more broadly examines the topics of music and performance studies; with the latter focusing on composers active today, such as Marco Alunno, or those from the recent past who are lesser-known and performed, such as Pietro Cimara and Leo Ornstein.

Following from Nones’s (ed.) previous publication Music as Communication: Perspectives on Music, Image and Performance (ABE, 2018), this work provides a rather unique contribution as a choral attempt at exploring performance today. The intention of this book and the downloadable audio content, with live recordings of the music explored at the conference from which the volume originated, is to inspire fresh approaches to the study of a monument like Bach, while also encouraging original research of modern composition and performance. Recordings of the performances given over the two days of the conference serve either to clarify arguments made in the papers or to attest to the music explored more generally.

This volume is founded on the belief that the history of music is comprised of many figures, some of whom are undeservedly forgotten, and that our understanding of and approach to music is simultaneously shaped by the past and directed by the continual evolution of sounds and attitudes of the present. Examining music styles from baroque (Bach) to contemporary (Alunno), Forms of Performance will be of particular interest to Bach and performance studies scholars, as well as advanced researchers and PhD students in this field.

Chapter 2 From Bach’s violin to Italian pianos: the Sei Solo in the Italian piano transcriptions
by Chiara Bertoglio
Conservatory of Music of Cuneo, Italy

Michael Maul is a researcher at the Bach Archive in Leipzig, where he also serves as artistic director of the Leipzig Bachfest. Dr. Maul is internationally renowned for several Bach discoveries during the last decade. He is a lecturer in musicology at the Universities of Leipzig and Halle and produces on a regular basis a radio show on J.S. Bach for Deutschlandfunk Kultur.

Alberto Nones is the founder and president of AEMC and serves as the artistic director of various festivals in Italy. He is the author of four monographs and many articles. His piano recordings include "Pietro Cimara L'Infinito, Art songs for soprano and piano" (2019), "Johannes Brahms, The Sonatas for piano and violin" (2017), and "Fryderyk Chopin, The Complete Mazurkas" (2016). Dr. Nones collaborates as author and broadcaster of radio programs with Rai, and teaches History and Aesthetics of Music at the Conservatory of Gallarate, Italy.