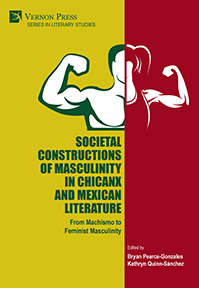 From Machismo to Feminist Masculinity

E-book
$ 74
Availability: Available through resellers
also in Hardback $ 58 , Paperback $ 34
currency displayed based on your location
(click here to change currency)

“Societal Constructions of Masculinity in Chicanx and Mexican Literature: From Machismo to Feminist Masculinity” brings together well-argued essays that range from the mid 20th century to the contemporary times, providing readers with a long enough continuum to see the changing representations of “masculinity.” Unlike critical collections, which tend to focus on either side of the national border, this volume includes essays on Mexican and Chicanx cultural texts, which allows for a broader readership interested in Mexican, Greater Mexican, and Chicanx Studies. This will also be of interest to scholars of comparative studies of Latin American literature and culture.

The book begins with how violence, citizenship, and masculinity become intertwined as patriarchy fights, both literally and figuratively, to regain the ground it lost to women's agency during WWII. It explores the author's subversion of the status quo through imagining a new aesthetic based on a poetic masculinity which highlights new forms of social relations that validate new masculinities. This is followed by examining texts from the aftermath of the Mexican Revolution that demonstrate how, by pairing the successes and failures of the nation with masculinity, one can see that as time progresses the very definition of what it signifies to be a Mexican male has been adapting along with the State. The book also explains how fatherhood has been represented in Chicanx literature and considers masculine relationships more broadly.

The analysis of the telenovelas in this volume indicates how homosexuality serves as the catalyst for a reconfiguring of gender narratives, ultimately leading to change and acceptance within Mexican society while providing an unequivocal look into the future of masculinity as it begins to overthrow its historical gender binaries.

This book will appeal to advanced undergraduates, graduate students, and professionals, both specialists and generalists, in fields including Gender Studies, Women's Studies, Comparative Studies, Chicana/o Studies, Latina/o Studies, Latin and American Studies, and Cultural Studies. Feminists and activists for human rights will also find this an interesting and valuable text.

Chapter 3 What a Man Ought To Be: Villoro’s Awkward Macho in a Neoliberal Mexico
Carmen Patricia Tovar
Oberlin College
Alejandro Puga
DePauw University

Chapter 7 On the Border, In the Bar: Approaching Feminist Masculinities through Border Thinking in Everything Begins and Ends at the Kentucky Club by Benjamin Alire Sáenz
Joshua D. Martin
University of North Georgia

Bryan Pearce-Gonzales is Professor of Hispanic Studies in the Department of Languages and Cultural Studies at Shenandoah University in Winchester, VA, USA. Dr. Pearce-Gonzales received his M.A. and his Ph.D. in Hispanic Studies from the University of Kentucky. He is a specialist in 20th Century Latin American Literature with an emphasis on Chicanx Literature and Culture and has recently published critical essays on Chicanx autobiography and fiction. Professor Pearce-Gonzales is a member of the Executive Committee of the Mountain Interstate Foreign Language Association which holds an annual conference as well as publishes a journal.

Kathryn Quinn-Sánchez is Professor at Georgian Court University in Lakewood, New Jersey, USA, where she teaches a variety of courses on Latin American and Latinx literature, culture, and the Spanish language. She received her M.A. from Middlebury College through their graduate program in Madrid, Spain. Dr. Quinn-Sánchez earned her Ph.D. in Romance Languages and Literatures from the University of North Carolina, Chapel Hill, USA. She serves as co-editor of the online, peer-reviewed, scholarly, and creative e-journal Label Me Latina/o. In addition to publishing several articles in the field of literary criticism, Professor Quinn-Sánchez has authored A Literary and Political History of Post-Revolutionary Mexico: Redefining "The Ideal" (2006) as well as Identity in Latin American and Latina Literature: The Struggle to Self-Define in a Global Era Where Space, Capitalism, and Power Rule (2014). In 2015, her edited collection of critical essays was published under the title Negotiating Latinidades, Understanding Identities within Space.

From Machismo to Feminist Masculinity