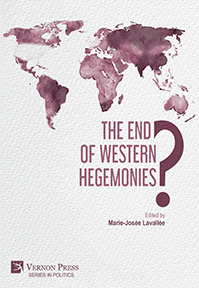 E-book
$ 108
Availability: Available through resellers
also in Hardback $ 96 , Paperback $ 57
currency displayed based on your location
(click here to change currency)

The concept of hegemony is often used to explain US dominance over the world after the Cold War. Beyond this essential issue, the book tries to extend the Gramscian concept to different areas of study. The historical perspectives sheds a new light on the still-pertinent concept in International Relations.

In the face of recent trends like growing authoritarianism and xenophobic nationalism, the rise of the Far Right, the explosion of economic and social inequalities, heightened geopolitical contest and global capitalism’s endless crisis, and the impacts of shocks like the Covid-19 pandemic, discourses about the ‘decline of the West’ no more look like mere ruminations of a handful of cultural depressives and politically disillusioned; they sound increasingly realistic.

This volume addresses this issue by mapping and analyzing the forms, mechanisms, strategies, and effects, in the past, the present, and the future, of Western hegemonies, namely, asymmetrical relations that bring advantages or, at least, secure the superiority of Western state and non-state actors in politics, economics, and culture broadly understood. Over the past decades and centuries, Westerners never ceased claiming supremacy in all these spheres. A host of these relations were initiated through colonialism and imperialism, and perpetuated through informal imperialism, but there are other channels: political interference, inequalities between countries, and attempts at affirming the supremacy of the so-called Western way of life was also secured through the military might and economic power of great Western actors.

This book explores sites of Western hegemonies and contributes to understanding the mechanisms through which international hierarchies are formed and maintained. Bringing together the research of scholars from various fields in the humanities and social sciences, political science, international relations, political philosophy, sociology, history, postcolonial studies, criminology, and linguistics, this volume develops a multidisciplinary outlook on the issue of Western hegemonies that allows uncovering resemblances between various forms of asymmetrical relations and their mechanisms.

Chapter 1
The present and future of the West’s hegemony on democracy. An analysis informed by István Mészáros’ work
Marie-Josée Lavallée
University of Montréal

Chapter 5
The liberal international order from the standpoint of the Russian, Soviet Empires and post-socialism
Juho Korhonen
Boğaziçi University, Turkey

Chapter 6
The erosion of Western hegemony by Russia and Turkey: the tripartite relations of US, Russia, and Turkey
Muhammet Koçak
Independent Scholar

Chapter 7
Passing of the idea of Japan as a bridge between the East and the West
Pekka Korhonen
University of Jyväskylä, Finland

Chapter 8
The illegitimate ally: the hegemonic national narrative of Japan in the US (1945-2020)
Jordi Serrano Muñoz
Open University of Catalonia, Spain

Chapter 9
Islam and Muslims: a threat to, or a victim of, Western hegemony?
Anouar El Younssi
Oxford College of Emory University, USA

Chapter 12
Military hegemony, colonialism and martial race. Its role in the disintegration of Pakistan in 1971
Mark Fraser Briskey
Murdoch University at Murdoch, Australia

Epilogue: The present and future of Western hegemonies: the swan song of an era?
Marie-Josée Lavallée
University of Montréal, Canada

Marie-Josée Lavallée is a lecturer and researcher at the Department of History at the University of Montréal. Her research axes are the history, theory, and practices of democracy, Western imperialisms, and critical theory. Part of her past and current work scrutinizes democratization, democracy, and revolutions in the twentieth century. She also investigates current challenges to democracy (authoritarianism and fascism) and the future of democracy from a global perspective. She lectures on European history and international relations in the nineteenth and twentieth centuries, globalization, and democracy.