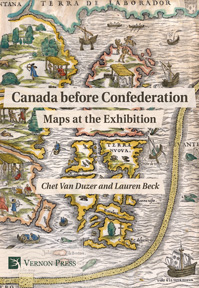 Paperback
$ 75
Availability: In stock
also in Hardback $ 85 , E-book $ 58
currency displayed based on your location
(click here to change currency)

"More than mere drawings of coastlines, rivers, mountains, and settlements on flat sheets of paper, European cartography was a tool of power, domination, and colonization, not only over the land that became Canada but, more significantly, over the Indigenous Peoples who lived in the areas, the First Nations. In this informative and thought-provoking collection of scholarly essays regarding 18 maps dated from 1508 to 1772 illustrative of early Canadian history, the two authors have brought forth a work that is important for all historians to read, yet is also easily accessible to the general public. The authors have consciously examined each of these maps, not only for evidence of the Indigenous Peoples upon the European image of Canada over time, as represented in the maps, but also for the effects, often adverse, that the use of the maps had upon the Indigenous Peoples. The quality of the scholarship is of the highest level. The reader will be engaged by the richness of depth and detail. Each map is placed within the historical events surrounding it, disclosing the interactions, confrontations, and minglings between the British, French, and Indigenous Peoples that led to the formation of the nation of Canada. In addition to a checklist of 51 books and over a hundred articles, the footnotes provide dozens of additional sources not listed. This bibliographical richness makes this book an important source for Canadian history of the 16th, 17th, and 18th centuries. As a bonus, the footnotes provide links to digital copies of the maps for further, more detailed examinations."

Each of the maps featured in this book was showcased in the exhibition “Canada before Confederation: Early Exploration and Mapping,” which took place in several locations, both in Canada and abroad, in Fall of 2017. The authors provide a scholarly study highlighting the importance and unique features of each of these jewels of cartographic history, with particular attention paid to how they demonstrate the development of Canadian identity at the same time that they reveal Indigenous knowledge of the lands now known as Canada.

Secondary Literature on the Exploration and Mapping of Canada to 1763

Map of North America from the Vallard Atlas, 1547

Arthur Dobbs, A New Map of Part of North America, 1744

John Mitchell, A Map of the British and French Dominions, 1755

Idotlyazee and Meatonabee’s map north of the Churchill River, c. 1768

Samuel Hearne, A Map of part of the Inland Country, 1772

Chet Van Duzer is an NEH-Mellon Fellow at the Library of Congress and a board member of the Lazarus Project at the University of Rochester, which brings multispectral imaging to cultural institutions around the world. He is a researcher and writer who has published extensively on medieval and early modern maps in journals such as Imago Mundi, Terrae Incognitae, Word & Image, and Viator. He is the author of Johann Schöner’s Globe of 1515: Transcription and Study, the first detailed analysis of one of the earliest surviving terrestrial globes that includes the New World; and (with John Hessler) Seeing the World Anew: The Radical Vision of Martin Waldseemüller’s 1507 & 1516 World Maps. His book Sea Monsters on Medieval and Renaissance Maps was published in 2013 by the British Library, and is now available in German and Russian editions, with a Chinese edition on the way. In 2014 the Library of Congress published a study of Christopher Columbus’s Book of Privileges which he co-authored with John Hessler and Daniel De Simone. His book The World for a King: Pierre Desceliers’ Map of 1550 was published at the end of 2015 by the British Library, and in 2016 Brill published a book he co-authored with Ilya Dines, Apocalyptic Cartography: Thematic Maps and the End of the World in a Fifteenth-Century Manuscript. His current project is a study of the annotations in a heavily annotated copy of the 1525 edition of Ptolemy’s Geography.

Lauren Beck is Associate Professor of Hispanic Studies at Mount Allison University, Adjunct Associate Professor at the University of Western Ontario, and Editor of Terrae Incognitae, the international journal devoted to the history of discovery and exploration. Her research specializations include early modern visual culture of the Spanish world, the Iberian Atlantic, and in particular book illustration and historical cartography. She is the author of Transforming the Enemy in Spanish Culture: The Conquest through the Lens of Textual and Visual Multiplicity (2013) and her recent articles have appeared in Image & Narrative and Journal of North African Studies. With Christina Ionescu, she co-curated the exhibition Mapping North America: Narratives of Discovery.