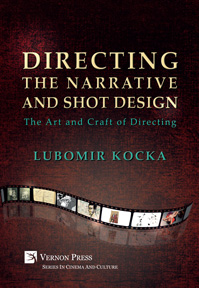 The Art and Craft of Directing

“The book is written with commendable clarity, dealing with the conceptual side of the film directing. Skilled artistry and a high level of craftsmanship results in a high-quality product. And that’s the premise of this book. This book will equip the readers with the necessary knowledge and practical experience, ensuring they are highly qualified and capable for any director’s position.”
Milos Forman, Film director, screenwriter, and professor. One Flew Over the Cuckoo's Nest (1975), Amadeus (1984), The People vs. Larry Flynt (1996). His films have been nominated for a total of 33 Academy Awards, with 13 wins including the coveted Best Director and Best Picture awards.

“Lubomir Kocka shares his encyclopedic technical expertise as well as the invaluable wisdom of an industry veteran with infectious passion. This comprehensive guide combines clear, practical advice with brilliant insights to enable everyone - from the novice to the working professional - to create compelling cinema. With great clarity, Kocka demystifies the art of filmmaking and reveals the ways in which we can powerfully express ourselves and connect with others through this magical medium.”
Geoffrey Fletcher, Film director, professor, screenwriter of Precious, the winner of the Best Adapted Screenplay Oscar in 2010.

“This is the epitome of guidance for any director, beginner or professional. The information is very detailed and informative. All directors would benefit from this book.”
Stratton Leopold, Producer of major, large-budget motion pictures. The Wolfman (2010), Mission: Impossible III (2006), The General's Daughter (1999).

“Professor Kocka has managed something I wouldn’t have thought possible. He has created a technical book with impeccable scholarship. One of the many remarkable aspects is that the content is so nuanced and layered, it is accessible to beginner film students while at the same time revealing more in-depth issues to the experienced director with each subsequent reading. Cinematographers and production designers will also find this book to be a fountain of useful knowledge. This book is a must buy for any filmmaker whether they are aspirational or well-seasoned.”
Michael Nolin, Film professor, motion picture producer, writer/director. Selected producing credits include Mr. Holland's Opus (1995).


This book is a “directing-altering book” as it provides high-quality learning resources that encourage and challenge film enthusiasts, aspiring directors, film students, and professionals to strive for new levels of excellence and impact in their film directing, television directing, and new media directing.

This book puts forward a well-informed and innovative discussion of critical director’s choices that have not previously been considered by existing texts on film and television directing. This book presents a wide range of directorial concepts and directing exercises that include:

• Psycho-physiological regularities in left-right/right-left orientation transferred to a shot design. How directors can manipulate the viewer’s perception of a character and of the journey they are on using screen direction.
• Methodology and visual strategy for rendering a scene based on character perspective.
• The directorial concept of emotional manipulation.
• Demystifying the 180-degree rule.

Lubomir Kocka is a director, screenwriter, producer, and professor. He has directed nine feature films, thirteen television dramas, and seven TV series and miniseries. He has won numerous awards from international film and television festivals around the world. In addition to his numerous directing and writing credits, he is also an acclaimed film educator. Currently, he is based in Savannah, Georgia, USA, at the Savannah College of Art and Design (SCAD) as a Professor of Film and Television, where he has taught since 2002.

The Art and Craft of Directing