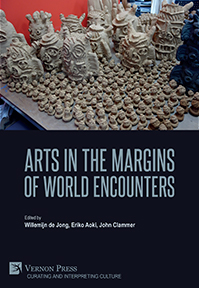 Arts in the Margins of World Encounters

Hardback
$ 61
Availability: In stock
also in E-book $ 94
currency displayed based on your location
(click here to change currency)

The discussion about such a complex topic as arts at the margins, their relation to the global art market and the violence that occasionally marks this relationship – be it as exclusion, as a medium of arbitrary hierarchization, or appropriation – is manifold and highly interesting.
In their contributions, the authors and editors address the extraordinary heterogeneity of the arts – ranging from textiles to masks, statues, paintings, theatre performances and poems: for a long time many of these arts have been (and some still are) assigned to “folk” art and not to art. The contributions show that and how these categorizations can no longer be justified – especially since aesthetic categories can no longer be thought of as universal. Based on field research all over the world (New Zealand, Australia, Japan, Indonesia, India, Rwanda, Martinique, Brazil), the authors analyse art production in all its facets: including social/cultural embeddedness, political conditions, geographical features, historical formations as well as changing perception patterns of local producers as well as the global actors of the art world.
In short, they prove the power of art production as well as of the works and their extraordinary agency. The analyses refer to important theoretical approaches of the anthropology of art, above all, to Alfred Gell's approach developed in 'Art and Agency'. Inspired by this, concepts such as Andrea Grieder's “poetic efficacy” are generated. New concepts such as Gita Wolf's “symbolic inversion” are also created. The benefit of reading these differentiated and empirically grounded contributions lies in the aesthetic richness they convey, in the possible transformations they suggest in a wide range of local as well as translocal settings, and finally, in furthering the approach of unraveling dichotomic thinking in the field of arts as well.

The volume develops theoretical approaches inspired by innovative theorists and is based on currently debated analytical categories including the ethnographic turn in contemporary art, polycentric aesthetics, and aesthetic cannibalization, among others. This collection also incorporates fascinating and intriguing contemporary cases, but with solid theoretical arguments and grounds.

'Arts in the Margins of World Encounters' will appeal to students at all levels, scholars, and practitioners in arts, aesthetics, anthropology, social inequality, and discrimination, as well as researchers in other fields, including post-colonialism and cultural organizations.

Part I. Re-Creating Art Conventions in the Margins of World Encounters

Part III. New Forms of Art and Ethnography in Museums and Development

Chapter 9
Poets from the refugee camps in Rwanda talk to the world
Andrea Grieder
University of Technologies and Arts, Rwanda

Willemijn de Jong is a researcher and has taught anthropology as an Associate Professor at the Institute of Social Anthropology and Cultural Studies (ISEK), University of Zurich. She has also taught at the Universities of Bern and Vienna. She was awarded grants by the Swiss National Science Foundation for national and international research projects she has headed. In recent years she has worked on textiles, art, fashion and globalization, and she was a guest curator at the Museum der Kulturen Basel. She has published widely in German, and her publications in English include "Rice Rituals, Kinship Identities and Ethnicity in Central Flores" in 'Food and Kinship in Southeast Asia' (2007), and "Red Threads in Flores" in 'The Common Thread: The Warp and Weft of Thinking' (2016). She recently co-edited the publication to the exhibition at the Museum der Kulturen Basel, both with the title 'Striking Patterns: Global Traces in Local Ikat Fashion' (2016), and 'Urban Dreams: Transformations of Family Life in Burkina Faso' (2018).

Eriko Aoki is Professor of Anthropology at Ryukoku University, Japan. She was granted a D.Phil. by the Australian National University in 1996. She has conducted anthropological research on poetic language, gift exchanges, and rituals in Central Flores, Indonesia, since 1979, and on children of ethnic minorities, coal-mining societies, Indonesian nursing labour immigrants, and art brut in Japan since the late 1990s. Her theoretical interests are semiotics, fetishism, modernity, and enchantment. Her publications include "'Center' and 'Periphery' in Oral Historiography of a Peripheral Area in Southeast Indonesia" in 'Globalization in Southeast Asia' (Berghahn Books 2003) and "Entangled Democracy, Decentralization and Lifeworld in Flores under Global Trends" in 'Foundations for Local Governance: Decentralization in Comparative Perspective' (Springer 2008). She also published a single-authored book in Japanese.

John Clammer is Professor of Sociology in the Jindal School of Liberal Arts and Humanities at O.P. Jindal Global University (Delhi, India). He previously taught at Sophia University (Tokyo) for almost two decades, and prior to that at the National University of Singapore. Dr Clammer has been a visiting professor or fellow at universities around the world including the United Nations University, Kent, Oxford, Handong, Tokyo, Buenos Aires, Murdoch, Pondicherry, and the Bauhaus Universität Weimar. He has also been a fellow of the Institutes of Advanced Studies at Warwick University and at the Jawaharlal Nehru University, Delhi. Professor Clammer’s work has encompassed many fields including sociological and anthropological theory, the sociology of religion, solidarity economy, and the sociology and anthropology of Southeast Asia and Japan. His recent work has been on the sociology of art and the interface of culture and development, includes monographs like ‘Culture, Development and Social Theory’, ‘Towards an Integrated Social Development, Art, Culture and International Development’, ‘Vision and Society: Towards a Sociology and Anthropology from Art’, and the co-edited volume ‘The Aesthetics of Development: Art, Culture and Social Transformation’, as well as the forthcoming ‘Cultural Rights and Justice: Sustainable Development, the Arts and the Body’.

Arts in the Margins of World Encounters