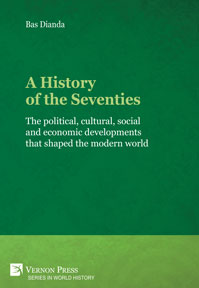 Paperback
$ 48
Availability: In stock
also in Hardback $ 57 , E-book $ 79
currency displayed based on your location
(click here to change currency)

Relegated to the back bench, the Seventies are often considered as no more than a bridge between the more momentous decades of the Sixties and Eighties. However, delving into this historical period, this book asks; how significant were the Seventies in terms of political, economic and cultural developments? And, to what extent did this decade change the course of the second half of the twentieth century?

Seeking to uncover the extraordinary transformative capacity of this era, this book reveals how important events from this decade marked history for many years to come. Grounded in a ‘history of developments,’ this book investigates connections of causality or concomitant causality with events that were yet to come. The first part of this volume traces the economic, political and cultural trends that prevailed during this decade, before turning its attention to the legacies of the Seventies and the events that changed the course of history and that are still having repercussions to this day.

From the oil crisis to microwaves, this book offers an in-depth and complete look at the Seventies that will not only be of interest to historians and economists, but also sociologists and those intrigued by the evolution of political, economic and cultural
developments.

Dr. Basilio Dianda has over 25 years of medical experience, yet has always been fascinated by History and History of Art. Often involved in historical debates, Dianda looked to apply his interest and curiosity for history to a work of non-fiction. A History of the Seventies is the result of this inquisitiveness. Motivated by careful and extensive research, his scientific background means he is able to offer a unique and innovative perspective to this ‘History of Developments’. Dianda has also published Political Routes to Starvation, an all-encompassing analysis of eighty famines from across the globe.

History of the second half of the 20th century, Economic transformation during the seventies, Evolution of Cultural tendencies, Counterculture, Individualism, The double spirit of the seventies, Legacies from a previous time, The 1970-oil crisis as historical breaking point, The Far Left, Origins of the power of the Media, Political pursuit of consent, The Graduate Capitalism, Second wave of feminism, Radical Feminism, Saddam Hussein, Reza Pahlavi Sha of Iran, Persepolis, Allende’s economic disaster, The fall of the Ethiopian Empire, The Bangladesh Famine