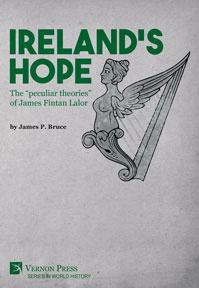 Hardback
$ 44
Availability: In stock
also in E-book $ 75 , Paperback $ 36
currency displayed based on your location
(click here to change currency)

This work offers a comprehensive analysis of James Fintan Lalor’s intellectual formation and his awkward relationship with the wider nationalist movement in mid-century Ireland. Most importantly, and what makes this work highly relevant to historians of nineteenth-century Ireland and those interested in land reform in general, is the detailed study of Lalor’s ideas within the political contexts he articulated them, as well as the formative influences on his work. This significant close reading of Lalor’s letters and published work usefully contextualises his varying and sometimes contradictory expressions on land tenure, showing how they were shaped by the exigencies of contemporary economic conditions and Lalor’s own particular social, political and familial circumstances. Given that, as the book clearly identifies, previous work on Lalor has often tried to fit him neatly into a specific (and often anachronistic) ideological tradition, this is an important corrective, and where the work makes its most original contribution.
Of interest to scholars of the Irish land question more broadly is the range of contemporary context regarding Lalor’s associates, confidantes and competitors in the national movement. One thing that emerges is just how common the precepts and premises upon which Lalor made his deductions about land and sovereignty actually were – even if others were led to varying conclusions. In highlighting Lalor’s general lack of academic knowledge on the question of property rights, the author brings in to focus both the generality of Lalor’s presumptions and the originality of his conclusions. The author makes a very strong case and clearly explains how Lalor’s conception of a ‘right to the land’ functioned to justify ownership of moveables but not the land itself, only in usufruct, and how this underpinned a democratic-republican understanding of national sovereignty.
The work also surveys the historiography effectively. Many assessments of Lalor and his work have sought to identify him as either a utopian land nationaliser, or simply a confused proponent of peasant proprietorship. This book corrects this false dichotomy by showing the complexity of contemporary understandings of the land question. The assessment offered here of Lalor as a ‘de facto land nationaliser’ is well supported by the evidence, and entirely consonant with what could be claimed within the realms of political possibility at the time.
There is much to commend in the quality of the scholarship, not least the broad range of secondary material consulted and the excellent and extensive archival work. It is well written, clear and concise. However, it retains the considered, perhaps even cautious, tone and historiographical focus of a scholarly study rather than a book for a more popular audience. This does not appear to be much of a drawback since there is a strong academic interest in nineteenth-century Ireland and the land question to which this book will be highly relevant. […] This excellent and detailed study is certainly an important contribution, not only to the study of Lalor himself, but to the land question in mid-century Ireland more broadly.


This is an exemplary exercise in intellectual history, distinguished for the clarity of its writing and the extensive research underpinning it. The result is a very dynamic picture of how James Fintan Lalor’s ideas on land ownership and Anglo-Irish relations evolved during the 1830s and 1840s. It’s an exciting account of one of Ireland's most important radical thinkers.


This is an important contribution of the intellectual history of the land question and republicanism in nineteenth-century Ireland through a close reading of the writings of James Fintan Lalor. The author shows that Lalor was part of a wider radical intellectual milieu. He had a singular breadth of vision that was philosophical and political in outlook. While most of Lalor’s ideas had not been put into practice, he was described as a ‘most trenchant and accomplished’ thinker that offered a coherent and far-sighted philosophy. His true legacy was his vision on Ireland, its land and people.
Bruce shows that Lalor was one of the most original thinkers on the Irish land question. Using informed conjecture, based on a series of solid coincidences to speculate on Lalor’s influences, it leads to an important discussion on previous agrarian thinkers and the intellectual oeuvre of Lalor. Lalor was inspired by a wide variety of cosmopolitan thinkers, but he was, deep down, a conservative Irish farmer. This close reading allows for the exposition of ideas, challenges and contradictions in them, and also how Lalor was repeatedly plagiarised by contemporaries such as John Mitchell.
Bruce shows us how Lalor embraced Ireland’s past as a platform for the future in improving access to land and, as a result, the quality of life for people living on the land. His ideas were not fully embraced by contemporaries, though John Mitchell did pass off the more interesting ideas as his own. It was the Land War generation of the 1870s and 1880s that harked back to Lalor during their speeches.

In 1847 and 1848 a little-known farmer named James Fintan Lalor wrote a series of newspaper articles in which he outlined his vision for Ireland after the Great Famine. Although they have been reprinted and republished many times since, until now there has been no systematic study of the principles and proposals that Lalor expounded. In this book, the author considers Lalor’s brief career as a writer and offers new insights into his treatment of the national and land questions.
By elucidating Lalor’s ideas on these questions, exploring possible influences on his thinking, and assessing the impact of his writings on his contemporaries, the author seeks to address what he regards as two deficiencies in the historiography. The first of these is the tendency to assign only a minor, supporting role to Lalor during the brief heyday of Young Ireland. Academic studies typically portray him as little more than a catalyst in the radicalisation of figures like John Mitchel, rather than as a profoundly original thinker in his own right. The second issue is the commonly held perception of Lalor’s proposals on land tenure as foreshadowing the creation of a “peasant proprietary” later in the century. The author argues that Lalor advocated a much more radical plan that would link his two primary objectives: the creation of a sovereign Irish republic, and transfer of control over landholding from a small number of landlords to the entire Irish people.
By comparing and contrasting Lalor’s theories with those of earlier figures such as Thomas Paine and James ‘Bronterre’ O’Brien, this ground-breaking book broadens the perspective on Lalor and his writings beyond the context of Irish nationalism. As the author concludes, Lalor’s unique contribution to Irish radical thought merits a more prominent place in nineteenth-century intellectual history than it has hitherto received.
This book will be of great value to anyone interested in Irish history since 1800, especially in the areas of the Great Famine, the Young Ireland movement, and the Land War.

CHAPTER ONE
JAMES FINTAN LALOR’S “PECULIAR VIEWS ON THE TENURE QUESTION”
Duties vs. rights: Land tenure in Ireland
James Fintan Lalor: Background
Academia and Lalor
Lalor’s early writings
Lalor and the Irish Confederation
The Nation articles
Lalor’s “private exhortations and remonstrances”
Setback at Holy Cross
Lalor and The Irish Felon
“The Faith of a Felon”
Lalor the revolutionary
“This island-Queen”

James P. Bruce was born in Dublin, Ireland. He spent the greater part of his adult life in banking, before setting up his own marketing consultancy in 1997. Ten years later he published his first book, Faithful Servant: A Memoir of Brian Cleeve. Researching the book involved many hours in libraries and archives. Stimulated by this experience he enrolled as a mature student at Trinity College Dublin in 2008. He graduated with a BA in History and later moved to University College Dublin, where he completed an MA in the History of Religion and Society. In 2019 he was awarded an MLitt by the University of Oxford. He continues to write for both general and academic audiences and currently hosts a podcast series entitled Talk About Ireland.