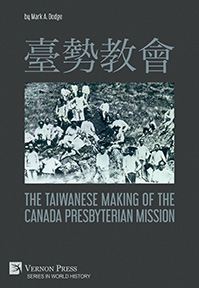 by Mark A. Dodge

Hardback
$ 64
Availability: In stock
also in E-book $ 99 , Paperback $ 51
currency displayed based on your location
(click here to change currency)

George Leslie Mackay (1844-1901) was a Scottish missionary active from 1871 to 1901 in Tamsui in northern Taiwan. He has been widely regarded as “one of the most successful missionaries of the nineteenth century”. He and his many admirers described his career as “phenomenal”, and Mark Dodge introduces him as the leading figure in a “miracle mission” that remains revered and celebrated in Taiwan to this day. In this new book, based on Mackay’s autobiography of 1903, a dozen more recent and brief biographical accounts in Chinese and English, a wealth of secondary sources on related topics, and freshly exploited primary sources, including genealogies and letters, Dodge also recognizes that Mackay’s maneuvering to extend an anthropologically informed Presbyterianism to northern Taiwan in the midst of competing Qing, British, French, and Japanese empires was something of an exercise in “cultural imperialism.” By means of careful research, nuanced analysis, and a clear narrative style, Dodge successfully transcends those two analytical poles and offers readers an absorbing account that brings to life many players in a drama featuring Mackay’s Taiwanese wife, Tiu Chhang-mia, and many other self-styled “helpers”, ranging from tea merchants to minority ethnic groups, who ultimately helped to turn the Mackays into associates of those many Taiwanese who were in search of a real and sustainable form of cultural autonomy in an inter-imperial world.

"臺勢教會 The Taiwanese Making of the Canada Presbyterian Mission" explores the Canadian Presbyterian Mission to Northern Taiwan, 1872-1915. The Canada Presbyterian Mission has often been portrayed as one of the nineteenth- century’s most successful missions, and its founder, George Leslie Mackay, has been called the most successful Protestant Missionary of all time. Mark Dodge challenges the heroic narrative by exploring the motives and actions of the Taiwanese actors who supported and established the mission. Religious leaders, teachers, doctors, and businessmen from Northern Taiwan collaborated to build a strong and vital mission, whose phenomenal success brought fame and status to Mackay and their cause. In turn, this status provided a protective space in which these Taiwanese patrons were able to exert significant economic and political autonomy in spite of pressures from competing colonial interests.
This book will be of particular interest to students and historians of nineteenth-century East Asia as well as scholars of comparative colonialism, with a focus on missionary history and cultural colonialism.

List of Figures
Acknowledgements
A Note on the Romanization of Chinese
Introduction: The Miracle Mission

Mark A. Dodge grew up in a small New England fishing village. He studied history and education at the University of New Hampshire, and has been a teacher of history in Buffalo, NY for twenty years. He holds a PhD in History from SUNY Buffalo. His research focuses on cultural interactions in colonial spaces.