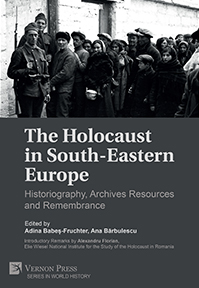 E-book
$ 100
Availability: Available through resellers
also in Hardback $ 62 , Paperback $ 54
currency displayed based on your location
(click here to change currency)

Their book has three parts:

- Part I deals Romanian post-communist archival resources and gives a good, solid description of archival sources relating to the Holocaust as well as emphasizes the total lack of access to Holocaust-related archives during the communist period.

- Part II focuses on recording discrimination, destruction, and rescue efforts. It is interesting and sheds new light on the persecution of neo-Protestant churches during the Antonescu regime as well as the participation of international charitable organizations in the rescue of Jews during the Holocaust.

- Part III address the aftermath of the Holocaust, providing fascinating chapters about the remembrance of the destruction of Roma during World War II and the post-communist politics of the Romanian Orthodox Church, which basically kept their Holocaust-related records completely sealed.

In conclusion, the volume "Holocaust in Eastern Europe: Historiography, Archives Resources and Remembrance" is an interesting and solid collection of articles, most of which shed new light on the history and historiography of the Holocaust in Europe.


The volume “The Holocaust in South-Eastern Europe” brings together rich and varied contributions that explore the complex interrelationship between access to archival resources, historiography and memorialisation. By conceptualising this vital relationship from a variety of perspectives and with reference to a region that is often still under-researched, the volume makes a critically important contribution to contemporary Holocaust studies. Above all, it highlights the centrality of open, transparent and well-documented archives for advances in Holocaust research and meaningful remembrance.

For many decades, the Holocaust in South-Eastern Europe lacked the required introspection, research and study, and most importantly, access to archives and documentation. Only in recent years and with the significant help of an emerging generation of local scholars, the Holocaust from this region became the focus of many studies.
In 2018, under the European Holocaust Research Infrastructure umbrella, the Elie Wiesel National Institute for the Study of the Holocaust in Romania organized a workshop dedicated to Holocaust research, education and remembrance in South-Eastern Europe. The present volume is a natural continuation of the above-mentioned workshop with the aim of introducing the current state of Holocaust research in the region to different categories of scholars in the field of Holocaust studies, to students and—why not—to the general public. Our scope, not an exhaustive one, is to present a historical contextualization using archival resources, to display the variety of recordings of discrimination, destruction and rescue efforts, and to introduce the remembrance initiatives and processes developed in the region in the aftermath of the Holocaust.

LIST OF ABBREVIATIONS
INTRODUCTORY REMARKS
ALEXANDRU FLORIAN
ELIE WIESEL NATIONAL INSTITUTE FOR THE STUDY OF THE HOLOCAUST IN ROMANIA, ROMANIA

CHAPTER ONE
THE HOLOCAUST UNDER ROMANIAN AUTHORITY. ARCHIVAL RESOURCES AND HISTORIOGRAPHY
ADINA BABES - FRUCHTER
STATE ARCHIVES OF BELGIUM / CENTRE FOR HISTORICAL RESEARCH AND DOCUMENTATION ON WAR AND CONTEMPORARY SOCIETY, BELGIUM
ANA BĂRBULESCU
ELIE WIESEL NATIONAL INSTITUTE FOR THE STUDY OF THE HOLOCAUST IN ROMANIA, ROMANIA

CHAPTER NINE
PERCEPTIONS ON THE ROMA GENOCIDE IN POST-COMMUNIST ROMANIA: PATTERNS OF MEMORY AND IDENTITY
PETRE MATEI
ELIE WIESEL NATIONAL INSTITUTE FOR THE STUDY OF THE HOLOCAUST IN ROMANIA, ROMANIA

CHAPTER TEN
TAKING THE ARCHIVES OUT OF HOLOCAUST RESEARCH: THE CASE OF THE ORTHODOX PERPETRATORS IN CONTEMPORARY ROMANIA
IONUȚ BILIUȚĂ
THE GHEORGHE ȘINCAI INSTITUTE FOR SOCIAL SCIENCES AND THE HUMANITIES/ROMANIAN ACADEMY, ROMANIA

Adina Babeş – Fruchter holds a Ph.D. in Political Sciences and is currently a European Holocaust Research Infrastructure researcher at the State Archives of Belgium/Centre for Historical Research and Documentation on War and Contemporary Society. Between 2006 and 2018 she was a researcher at the Elie Wiesel National Institute for the Study of the Holocaust in Romania. Adina Babeş-Fruchter has authored a number of articles and research papers which have been published in edited collections and scientific journals. She has also presented scientific papers at conferences, seminars, and roundtables. In 2020, she was awarded a Marie Skłodowska-Curie Actions Individual Fellowship to carry out research on Jewish refugees during the Holocaust at the Katholieke Universiteit Leuven, Belgium.

Ana Bǎrbulescu is a senior researcher and head of the research department at Elie Wiesel National Institute for the Study of the Holocaust, Bucharest, Romania. She is also an Associate Professor in the Department of Jewish Studies at the University of Bucharest. Her research interests include the social history of the Transnistria ghettos, forced labour of the Romanian Jews, antisemitism in interwar Romania, and Holocaust memory in post-communist Romania.