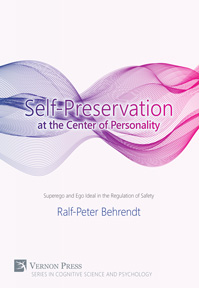 The book discusses personality as a unified set of evolved and culturally developed structures that serves a single and definable purpose, to maintain the individual’s safety, in the context of dyadic relationships, group processes and more abstract and fluid social configurations. The infant-mother relationship remains the blueprint for modes of relating to the social surround, at whatever level of complexity, and for approximating the sense of safety originally provided by the mother. The personality is organized around the need to maintain self-esteem, thereby preserving the individual’s sense of safety and warding off deep-seated paranoid anxiety, which signals the potential of annihilation of the self. Paranoid anxiety is the counterpart of intraspecific aggression and the potential of the group as a whole to attack and annihilate the individual. Paranoid anxiety, which was recognized by Melanie Klein as playing a critical role in infant development, is not overcome as development proceeds but remains latent, buried under layers of personality organization that are essentially concerned with sourcing recognition and approval from the social environment, thereby inhibiting others’ aggression and guarding against annihilation of the self. The book adds to self psychology (Kohut) by showing how the principle of self-preservation underpins all aspects of normal and abnormal character dynamics. It integrates self psychology with other branches psychoanalytic theory and revives the link between psychoanalysis and ethology. Ethology (Lorenz, Hass, Eibl-Eibesfeldt) has provided insights into how interrelated intraspecific aggression and appeasement gestures are critically important for the evolution of social behavior in higher animals as well as for cultural evolution in humans, insights that allow, more generally, for a bridging of the gap between psychoanalysis and the biology of social behavior. Furthermore, an evolutionary approach to character dynamics and related social phenomena will have important implications for understanding psychopathological vulnerabilities and self-perpetuating processes in mental illness.

1. Compliance
2. Exhibitionism and Ambition
3. Assertiveness and Aggressive Control
4. Display of Helplessness and Appeal to Pity
5. Detachment
6. Idealization and Identification
7. Conclusions

Dr Behrendt studied Medicine in Moscow, Russia and trained in psychiatry in Sheffield, England. He is presently working as Consultant Old Age psychiatrist in Guernsey. He previously published on neurobiological mechanisms of hallucinations and consciousness as well as on narcissism.