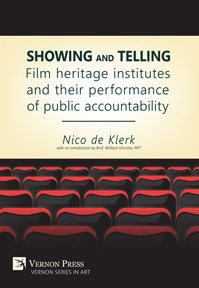 Paperback
$ 40
Availability: In stock
also in Hardback $ 50 , E-book $ 81
currency displayed based on your location
(click here to change currency)

"Showing and Telling is a book about a subject that has, until now, often eluded scholarly attention: the film archive as repository and the lack of transparent and consistent screening policies in an era of technological flux. But moreover, the book tells a story about the privileged world of the archivist and the scholar as successful navigators in a process of institutional gatekeeping, a process of willful restriction to archival holdings the author terms a ‘deficient performance of public accountability’.
Drawing on many years of professional experience and original scholarship, Nico De Klerk has produced an intimate account of a personal journey, in which he brings to light several case studies that focus on materials that do not feature regularly nor prominently in the public activities of film heritage institutes, and puts forward a number of suggestions to improve heritage institutions’ performance of public accessibility, both arguably consequences of having been part of that privileged world himself.
De Klerk’s ambitious critique of film heritage institutions Showing and Telling is a novel contribution to ongoing debates concerning issues of curatorship and heritage institutes’ public activities, as it interrogates what the potential ramifications are for the accounts of a country’s or region’s film heritage if these institutes retreat to a relatively restricted repertoire of materials. Showing and Telling is essential reading for both connoisseurs and the general public."

Showing and Telling is the first academic work to explore how publicly funded film heritage institutes account for their mandate in their public activities. It does that by inspecting and evaluating public presentations and visitor information about these presentations. The research was done by juxtaposing two complementary approaches. The first is grounded in the author’s experience as a collection researcher and curator and makes a case for the richness of archival objects usually ignored for their lack of aesthetic qualities. The second is a survey of the public activities of 24 institutes worldwide, based on their websites, in February 2014; the latter constitutes a unique source.

This original work uncovers the disconnect between the curatorial activities of these institutes and their missions. A central finding is that publicly funded film heritage institutes give their public an inadequate sense of cinema history. By and large they offer a mainstream-oriented repertoire of presentations, overwhelmingly consisting of feature fiction; they show a disproportionate amount of recent and new works, often through commercial distribution; their screenings consist of an unexplained melee of technological formats (sometimes substandard); and their presentations monotonously frame film as art, although their professed aesthetics are mostly of a cinephile nature and rest on received opinion. Specific materials, early cinema in particular, and specialist knowledge, both historical and methodological, are largely restricted to their network of peer communities. Wholesome transfer of full knowledge, in word and image, to the public is not a major concern.

Showing and Telling concludes with recommendations for curatorial activities. Firstly, with a conceptual apparatus that allows a more complete understanding of film heritage and its histories. Secondly, with a plea for rethinking the institutes’ gatekeeper function and for developing more varied, imaginative, and informative public presentations, both on site and online, that reflect the range of their collections and their histories.

Nico de Klerk (1956) has a BA in English and a MA in discourse analysis. He is currently a researcher at the Ludwig Boltzmann Institute for History and Society, in Vienna, Austria. Before that he worked for 20 years at the Nederlands Filmmuseum, in Amsterdam, as a film collection researcher, archivist, and curator, where he focused on orphan works, in the sense of works neglected in film archiving and film historiography.
To put such works ‘on the map’ he co-organized and researched the acclaimed Amsterdam Workshops on such pathbreaking topics as early nonfiction film, colors in silent film, colonial and exotic imaging, the program format, and advertising film. In order to safeguard such works he also worked in appraisal projects such as ‘Nitrate can’t wait’, ‘American fiction 1980-2010’ or ‘American documentary 1940-1980’, ‘Film collection of the Dutch Royal Tropical Institute’ as well as various private or home movie collections, especially those related to Dutch colonial history.
He has curated and presented archival programs in house at the Nederlands Filmmuseum as well as at the archival festivals in Pordenone and Bologna, the biennial Domitor conferences and other events and locations, e.g. Visual Delights (University of Sheffield); Forum des Images, Paris; FIAF (Cartagena, Colombia); and virtually all Orphans Symposiums. At the Nederlands Filmmuseum he curated programs on Raymond Depardon; Cary Grant; Dutch colonial cinema; Ernie Gehr; Péter Forgács; 100 Years of film exhibition, as well as series of documentary and experimental film. He has published widely, as editor, researcher, and archivist in international books and journals. Between 1990 and 2008, he was also a critic for the Dutch film magazine Skrien. Currently, he is on the editorial board of The Moving Image: the Journal of the Association of Moving Image Archivists and Domitor’s Early Cinema in Review.

• sociology: Erving Goffman’s frame analysis; Anthony Giddens’ expert system, trust, and reflexivity
• ethnomethodology: Harold Garfinkel, Harvey Sacks, Emmanuel Schegloff, Doro Franck
• sociology of the arts: Howard Becker’s gatekeeper function
• film historiography: Charles Musser, Richard Abel, Tom Gunning, Corinna Müller, Martin Loiperdinger, Matthew Solomon
• film museum curatorship: Eric De Kuyper, Peter Delpeut and their focus on the archive at large
What ties these people and approaches together is their empiricism (with the exception of Giddens, who is the most theoretical of all), their work grounded in objects and facts, yet which functioned as a source to generate new ideas in their researchers.