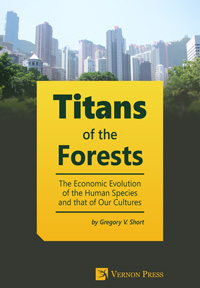 Hardback
$ 45
Availability: In stock
also in Paperback $ 30 , E-book $ 20 , E-book $ 76
currency displayed based on your location
(click here to change currency)

"In a world of increasing academic and expert specialization, it is rare to find a text so grand in scope and holistic in perspective. In anthropological terms, Mr. Short has produced what might be called a four-field approach to the history of the homo sapien sapien species that combines cultural, biological, archaeological, and linguistic evidence. But, the product will not only appeal to anthropologists, but also to many types of social scientists as well as non-academics interested in human evolution. The argument extends beyond evolution as it grapples with age-old questions of social organization and cultural meaning captured best in the title of Paul Gauguin’s painting: Where do we come from? What are we? Where are we going?
Given the wide array of themes, research, and disciplines that have covered the human question, one would expect any attempt at synthesis to be scattered and disorganized. To the contrary, Mr. Short’s writing is clear, accessible, and engaging. I could imagine using it in an introduction to Anthropology class just as likely as in a community book club.
What is unique about Mr. Short’s contribution is how he links our physical evolution to economics. However, despite the book’s economic base of analysis, it steers clear of repeating the mistakes of Marxist teleological assumptions about human development instead seeking to position our present social and economic organization in speculative and innovative theories of our past. Namely, Mr. Short argues that the nomadic economies of pre-agricultural humans provide the basis of every institution found in contemporary societies."

Instead of dwelling on the biological, physiological, or even the genetic aspects of our evolution, “Titans of the Forests” takes a completely different approach, which could be referred to as the unchartered and neglected field of macroevolution. Uniquely captivating, controversial, and very readable, it is the author’s contention that we as a species were continuously forced to change our way of obtaining nourishment, or rather our various economies, in order to adapt to the ever-changing world. And as a result of this economic adaptation, our species would then and only then begin to slowly change into the modern humans of today.
For much too long, the world’s scientific community has directed the discussion of our incredible evolution. As a matter of fact, our species’ biological, physiological, psychological, and cultural evolution has been instigated, propelled, and shaped by our economic adaptation to a fluctuating environment. In a very real sense, the scientists are so far into the trees that they have actually ignored the forest. Consequently, we teach human evolution as a hodgepodge of different theories within the realm of microevolution, thus failing to understand or even to recognize the economic thread that binds them altogether.
By integrating the timeline of our prehistoric past with that of our earliest known economies (food gathering, scavenging, and nomadism), the author was able to synthesize a sequence of events that illustrates the economic basis of our remarkable ascension and the beginnings of our present day institutions. He not only reveals the genesis behind the cultural forces that exist within every human society, but for the first time, he has created a systematic and holistic approach in explaining the “how” and the “why” we have economically, physiologically, and then culturally evolved. For unlike the rest of the animal kingdom, we have possessed the extraordinary ability to change our economy, which has made us an extremely adaptable species.

Chapter 1 The Dawn
“The Rise of Mammals”

Gregory Short is a retired world history, political science, and economics teacher with almost forty years of teaching experience. He received a History degree from the University of Texas at Arlington in 1976, before pursuing graduate studies in Public Administration and Education. In 1981, he graduated from the American Economic Institute of Free Enterprise at Texas A&M. He has researched the subject of our incredible economic evolution for over twenty years. In 2012, his military autobiography from 1967-1970, “Ground-Pounder,” was published by the University of North Texas Press.