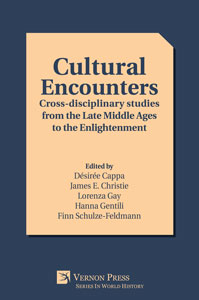 Paperback
$ 49
Availability: In stock
also in Hardback $ 57 , E-book $ 88
currency displayed based on your location
(click here to change currency)

This collection of essays contributes to the growing field of ‘encounter studies’ within the domain of cultural history. The strength of this work is the multi- and interdisciplinary approach, with papers on a broad range of historical times, places, and subjects. While each essay makes a valuable and original contribution to its relevant field(s), the collection as a whole is an attempt to probe more general questions and issues concerning the productive outcomes of cultural encounters throughout the Late Medieval and Early Modern periods.

The collection is divided into three sections organised thematically and chronologically. The first, ‘Encounters with the Past,’ focuses on the reception of classical antiquity in medieval images and texts from France, Italy and the British Isles. The second, ‘Encounters with Religion,’ presents a selection of instances in which political, philosophical and natural philosophical issues arise within inter-religious contexts. The final section, ‘Encounters with Humanity,’ contains essays on early science fiction, political symbolism, and Elizabethan drama theory, all of which deal with the conception and expression of humanity, on both the individual and societal level.

This volume’s wide range of topics and methodological approaches makes it an important point of reference for researchers and practitioners within the humanities who have an interest in the (cross-)cultural history of the medieval and Renaissance periods.

I. Encounters with the Past
1. Juno in the Epistre Othea by Christine de Pizan: An Investigation of the Pictorial Antecedents and of the Literary Sources
Lorenza Gay The Warburg Institute

2. From Pagan God to Magical Being: The Changing Face of the Faerie King and its Cultural Implications
Angana Moitra University of Kent, UK / Freie Universität Berlin, Germany

5. Notes on the Transmission and the Reception of the Sefer Hekhalot in the Renaissance
Margherita Mantovani Università degli Studi di Roma “La Sapienza”, Italy

9. The Mechanisation of Symbols: The Medieval Wolf and the New Science of Nature
Ivan Dimitrijevic Uniwersytet Warszawaski, Poland

Désirée Cappa obtained a BA and an MA in Philosophy from the University of Calabria and a three-year postgraduate degree in medieval and Renaissance art history from the University of Pisa. She worked for four years at the Boboli Gardens Museum researching the sculpture collection and the iconographic program of the gardens. In Florence, she also took part in different projects with the Gabinetto dei disegni e delle stampe degli Uffizi and the Fondazione Memofonte. In the UK, after an internship at Sotheby’s (Sculpture Department), she collaborated with various institutions such as the Garden Museum (London) and the Fitzwilliam Museum (Cambridge). She is also an editor at the Albertiana, the journal of the Société internationale Leon Battista Alberti (Paris). Cappa is currently writing a PhD thesis (funded by the European Union) on Pierfrancesco Riccio (1501-64), tutor and ducal secretary of Cosimo I de’ Medici.

James Christie is a historian of science with interest in early modern astronomy and astrology. He has a BA (Hons) in Early Modern and Medieval Studies from the University of Sydney, and an MA in the Cultural and Intellectual History of Europe from The Warburg Institute. He is currently writing a PhD thesis on the relationship between astrology and the ‘plurality of worlds’ debate in the 17th century.

Finn Schulze-Feldmann is a PhD student at the Warburg Institute. In his doctoral studies, he explores the reception of the Sibylline oracles in the context of the Reformation. He highlights the willingness to absorb the Sibyls as Christian prophets of pagan origin into the European culture of the fifteenth and sixteenth centuries as well as the theological debate about the appropriation of the Sibylline oracles as divine testimonies. After completing a BA in History and Musicology at the University of Potsdam, Finn obtained an MA in Cultural and Intellectual History from the Warburg Institute, London.