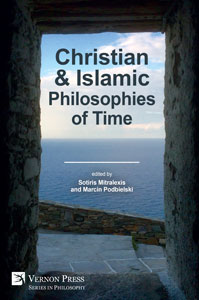 E-book
$ 88
Availability: Available through resellers
also in Hardback $ 58 , Paperback $ 49
currency displayed based on your location
(click here to change currency)

"There are many texts on the common concepts of philosophy and science such as God, universe and man. But not so much on time as complementary to all of them. In Christian and Islamic Philosophies of Time, Sotiris Mitralexis and Marcin Podbielski bring together different perspectives on time based on Christian/Byzantine and Islamic/Arabic thought. Through the concept of time this book not only demonstrates how time bridges Ancient Greece and Medieval Europe but also the Christian and Islamic worlds. Even contemporary debates on time have a lot to learn from this rich, timeless experience".

"This is an elegant, and interesting, execution of a fascinating set of research questions. The editors’ particular approach has notable comparative and sociological implications: if the Church (East-West/Orthodox-Catholic) is heading toward reconciliation and communion, this text will be an important voice of not only Systematic/Comparative academic theology, but also for inter-religious dialogue with Islam and ecumenism across denominations."

This volume constitutes an attempt at bringing together philosophies of time—or more precisely, philosophies on time and, in a concomitant way, history—emerging from Christianity’s and Islam’s intellectual histories. Starting from the Neoplatonic heritage and the voice of classical philosophy, the volume enters the Byzantine and Arabic intellectual worlds up to Ibn Al-Arabi’s times. A conscious choice in this volume is not to engage with, perhaps, the most prominent figures of Christian and Arabic philosophy, i.e., Augustine on the one hand and Avicenna/Ibn Sina on the other, precisely because these have attracted so much attention due to their prominence in their respective traditions—and beyond. In a certain way, Maximus the Confessor and Ibn Al-Arabi—together with Al-Fārābi—emerge as alternative representatives of their two traditions in this volume, offering two axes for this endeavor. The synthesis of those approaches on time and history, their comparison rather than their mere co-existence, is left to the reader’s critical inquiry and philosophical investigation.

Chapter Four
Syn-odical Ontology: Maximus the Confessor’s proposition for Ontology, within History and in the Eschaton
Dr Dionysios Skliris — University of Paris IV—Sorbonne & University of Athens

Marcin Podbielski teaches philosophy at the Jesuit University of Philosophy and Education Ignatianum, Krakow, Poland, and is Editor-in-Chief of Forum Philosophicum, an international journal for philosophy.