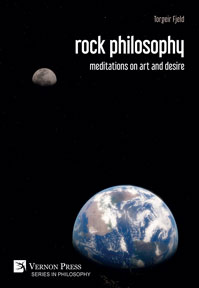 Paperback
$ 34
Availability: In stock
also in Hardback $ 55 , E-book $ 84
currency displayed based on your location
(click here to change currency)

Is the creative act like a volcano: an outburst that lights up the universe? This volume connects reason with desire and the arts in ways that enable us to imagine how creativity can bring us closer to the truth. The artistic quest for freedom stands in stark contrast to philosophy's call to subordinate art to reason and tradition. The struggle between them has culminated in artistic attempts to subsume philosophical matters within the domain of art. One central question in this study is what the consequences will be of a final dissolution of the boundary between the two domains: will all that remains of the artwork be an abstract howl of the rock – our rock, the planet – itself?

A Manifesto to Rock Philosophy

- Plato and inspiration
- The flash of insight: Heraclitus
- Parmenides and the demand of the phallus
- Into the volcano: Empedocles and Ulven

Chapter 2 The time of the rock

- Truth and psychoanalysis
- The advent and the gift
- Perception and forgetting

Chapter 4 The art of the rock

- Reason, freedom and the Absolute
- The specificity of poetry: Miłosz and Ulven
- Conceptual art and the return to philosophy

- Across the multiverse
- Passages
- The Other silence

Afterword: Outside the rock

Torgeir Fjeld is Head of the Ereignis Center for Philosophy and the Arts. He holds PhD’s in Philosophy (EGS, 2017) and Cultural Theory (Roehampton, 2012), and has taught at universities in the UK, USA, Norway, Poland and South Africa. He is the author of Perversion's Beyond (Atropos Press) and dressage and illusio. Fjeld’s research interests include desire, mediatisation and releasement.