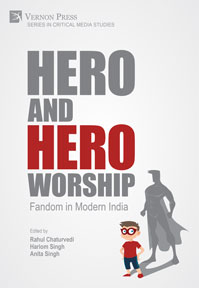 Hardback
$ 51
Availability: In stock
also in E-book $ 77 , Paperback $ 39
currency displayed based on your location
(click here to change currency)

The book offers to examine star/fan studies in India which seems to have experienced exponential extension in the aftermath of liberalization of Indian economy in 1991 and has now emerged as a vital part of pop culture. Fans are no longer perceived as passive, brainwashed recipients but contrary to this notion, they are now seen as actively subversive in mobilizing their dissent, questioning and even offering their take on texts. The focus in the book is on understanding fandom as a phenomenon than a type. In such a scenario the areas that the book sets out to explore are political, religious, filmic and cricket star -fandoms. The book analyses the rise of star formations and their consequent fandoms, star-fan bonds/collisions, physical and virtual space that the stars/fans inhabit. It is an interesting study on Indian fandom that not only draws on the works of Jenkins and other fandom scholars but also looks at economic and cultural specificities of Indian fandom. I am sure the book will not only be useful to the scholars working in the field but also to general readers interested in understanding star-fan interactions/intersections. The book provides a fascinating, vivid portrait of the myriad practices of the fan communities in the field of politics, religion, arts, sports, media, cinema, television, academics etc. that bring together the visual practices, spectators, performativity and desire modelling fans’ lives at the intersection of fantasy and reality. This volume is an informative and insightful addition to scholarship on fans and public culture in India.

In the aftermath of liberalization of Indian economy in 1991, the study of star-fan studies has experienced exponential expansion. Hero and Hero-Worship: Fandom in Modern India explores the areas of political, religious, film and cricket star fandoms; analyzing the rise of star formations and their consequent fandoms, star-fan bonds, as well as the physical and virtual space that both stars and fans inhabit.

As perhaps one of the first book-length studies on Indian fandom, this volume not only draws on the works of Jenkins and other fandom scholars, but also explores the economic and cultural specificities of Indian fandom. This book will be of particular interest to scholars working in the field, as well as general readers interested in understanding star-fan interactions and intersections.

2. Discourse on Fandom in Modern India: Where do We Stand?
Priyanka Shivadas
University of New South Wales, Canberra, Australia

12. What My Hero Means to Me: The Confession of a Batman Enthusiast
Amar Singh
Banaras Hindu University, India

Rahul Chaturvedi teaches Language and Literature at the Department of English, Banaras Hindu University (Varanasi, India). Prior to joining BHU, he also taught at AMPG College, Varanasi & Central University of Jharkhand (Ranchi, India). He has published a number of research papers in journals of national and international repute. He is Editor-in-Chief of Glocal Colloquies, a peer-reviewed international journal. His areas of interest include Indian and South Asian literatures, film studies, and translation.

Hariom Singh is currently working as Assistant Professor at Babasaheb Bhimrao University, Satellite Campus, Amethi (UP India). He has completed his Masters in English Literature and PhD from Banaras Hindu University (Varanasi, India). His doctoral thesis deals with the patterns of social reality in the novels of Githa Hariharan. An active participant in several national and international conferences, Dr Singh’s research interests include gender studies, masculinity studies, Indian English literature, and postcolonial studies.

Anita Singh is a Professor in the Department of English and Co-coordinator of the Centre for Women’s Studies and Development at Banaras Hindu University (Varanasi, India). She is currently a Fellow at the Indian Institute of Advanced Study at Shimla. Dr Singh completed a Major Research Project sanctioned by Indian Council of Social Science Research, on “Staging Gender: Performing Women in Ramlila of Ramnagar” in September 2016. Furthermore, she has contributed in four chapters in Routledge Handbook of Asian Theatre (ed. Siyuan Liu, 2016), has edited Gender, Space and Resistance: Women and Theatre in India (2013) and Revisiting Literary Theory and Criticism: Indian and Western Perspectives, and was the Guest Editor for the special issue of the Journal Gender Issues (Springer, 2018).