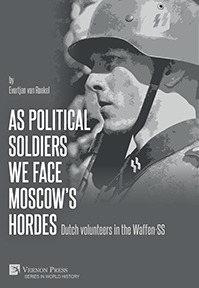 Hardback
$ 74
Availability: In stock
also in E-book $ 104 , Paperback $ 57
currency displayed based on your location
(click here to change currency)

This is a landmark study because it provides a wholly unique perspective on the greatest war of the twentieth century.


In 2010, Van Roekel provided shocking evidence that Dutch SS soldiers were involved in the massacre of Ukrainian Jews. Certain excerpts from the diaries of Eastern Front fighters left nothing to the imagination. In this book he delves even deeper into the diaries to find out what inspired young Dutch men to fight for Adolf Hitler. Again Van Roekel's answers are convincing and important.


Van Roekel has written an impressive study on Dutch volunteers in the Waffen-SS. I recommend it. 4/5

During the Second World War, approximately 25,000 Dutchmen served within the ranks of the military branch of the German SS: the Waffen-SS. They volunteered to fight to secure the victory of Nazi Germany. These Dutch volunteers fought mainly on the Eastern Front, and to a lesser extent, within their own national borders. After the war, the Allied victors regarded them as part of a criminal organization and jointly responsible for the atrocious transgressions of the Nazi regime. In the Netherlands, these men were reviled, branded as traitors and became pariahs in their own country. Those who had devoted themselves to the Nazi regime caused so much grief to the Netherlands that they had to be held accountable. Despite their military achievements, their reputation was damaged forever.

The Netherlands supplied the largest contingent of SS soldiers from the occupied North-western European territories. Who were these people? What led them to enlist, and what were the consequences of their choice? An important part of this study involves the autobiographical texts of nineteen Dutch volunteers in the Waffen-SS. These ego-documents recount their own immediate experiences and are mainly fragments from diaries, but there are also letters, individual notes, and memoirs. The ego-documents are placed within the larger historical context to provide an answer to the question of whether these men were only ideologically motivated and unconditional Nazi sympathizers, and for this, their criminal records are also researched. Among other topics, the book discusses their choice to enlist, their experiences at the front, and their involvement in genocide, providing a new perspective on the Eastern Front.

The NSB and the Waffen-SS


Part 2. Within the ranks of the Waffen-SS

Relationship between Dutch and Germans


Part 3. Life after the Third Reich

After the German capitulation

Historian and jurist Evertjan van Roekel’s main research interest is the Second World War. He studied Law at Utrecht University (LLM, 2008) and History, Holocaust and Genocide Studies at the University of Amsterdam (MA, 2009). He has published various articles in different Dutch historical journals, and he was a columnist in the journal ‘Wereld in Oorlog’ (2011-2014). Van Roekel has also been an external PhD researcher at the University of Amsterdam and an Associated Researcher at the NIOD Institute for War, Holocaust and Genocide Studies. Van Roekel wrote the chapter on the Netherlands in ‘Joining Hitler’s Crusade: European Nations and the Invasion of the Soviet Union, 1941’, edited by David Stahel (2017). His book ‘Veldgrauw’—on Dutch Waffen-SS volunteers—was published by Unieboek Het Spectrum in 2019 and was very well received in the Dutch and Belgian press.