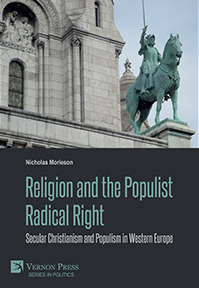 Religion and the Populist Radical Right: Secular Christianism and Populism in Western Europe

Hardback
$ 61
Availability: In stock
also in E-book $ 92 , Paperback $ 50
currency displayed based on your location
(click here to change currency)

Nicholas Morieson’s “Religion and the Populist Radical Right” skilfully untangles the complex relationship between populism, Christianity and Islam in the context of a rapidly changing Western Europe. Focusing on the cases of the Dutch Party for Freedom and the French National Front, Morieson shows how such parties embrace a ‘secular Christianity’ – defending ‘Judeo-Christian values’ and linking Christian identity and secular national identity in order to characterize ‘the people’, and at the same time, exclude Muslims from their ideal society. Theoretically sophisticated and empirically grounded, the book will be of great interest not only to scholars of religion, populism, party politics, Western European politics and discourse analysis, but anyone who wishes to make sense of some of the vital and controversial political and social phenomena of our time.


What role does religion play in the politics of the populist radical right in Western Europe? This is a hugely important question that remains key to understanding both the rise of populist leaders like Marine Le Pen and Geert Wilders as well as the emergence of Islamic terrorism that is now sweeping across the continent. In Religion and the Populist Radical Right, Morieson sets out a new and ambitious response to why religion has returned to Europe and provides new, path-breaking insights into the nature of populism in European politics. In particular, by demonstrating how Christian beliefs and values have become secularised in Western Europe, Morieson shows that Christianist secularism has been mobilized to exclude Islam from European society. This is essential reading for those seeking a better understanding of how we deal with the question of religion in Western Europe in an age of both populism and Islamic terrorism.

In Western Europe, populist radical right parties are calling for a return to Christian or Judeo-Christian values and identity. The growing electoral success of many of these parties may suggest that, after decades of secularisation, Western Europeans are returning to religion. Yet these parties do not tell their supporters to go to church, believe in God, or practise traditional Christian values. Instead, they claim that their respective national identities and cultures are the product of a Christian or Judeo-Christian tradition which either encompasses—or has produced—secular modernity.

This book poses the question: if Western European politics is secular, why has religious identity become a core element of populist radical right discourse? To answer this question, Morieson examines the discursive use of religion by two of the most powerful and influential populist radical right parties: The French National Front and the Dutch Party for Freedom. Based on this examination, he argues that the populist radical right has capitalised on a cultural shift engendered by the increasing visibility of Islam in Europe. Western Europeans’ encounter with Islam has revealed the non-universal nature of Western European secularism to Europeans, and demonstrated the secularisation of Christianity into Western European ‘culture.’ This, in turn, has allowed secular French and Dutch citizens to identify themselves—as well as their nation and, ultimately, Western civilisation—as Christian or Judeo-Christian.

Seizing on this cultural shift, the author contends that the National Front and Party for Freedom have built successful and similar brands of reactionary politics based on the notion that contemporary secularism is a product of Europe’s Christian heritage and values, and that therefore Muslim immigration is an existential threat to the core values of European politics, including the differentiation of politics and religion, and of church and state.

‘Religion and the Populist Radical Right: Secular Christianism and Populism in Western Europe’ will be of interest to scholars and researchers working on the intersections of Political Science, Sociology, and Religion. It will also appeal to the general audience interested in the relationship between populism in Western Europe and religious identity as it is written in an accessible style.

Religion and the Populist Radical Right: Secular Christianism and Populism in Western Europe