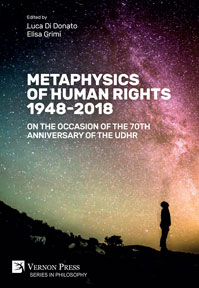 E-book
$ 97
Availability: Available through resellers
also in Hardback $ 63 , Paperback $ 55
currency displayed based on your location
(click here to change currency)

The 1948 Declaration of Human Rights demanded a collaboration among exponents from around the world. Embodying many different cultural perspectives, it was driven by a like-minded belief in the importance of finding common principles that would be essential for the very survival of civilization. Although an arduous and extensive process, the result was a much sought-after and collective endeavor that would be referenced for decades to come.
Motivated by the seventieth anniversary of the 1948 Universal Declaration of Human Rights and enriched by the contributions of eminent scholars, this volume aims to be a reflection on human rights and their universality. The underlying question is whether or not, after seventy years, this document can be considered universal, or better yet, how to define the concept of “universality.” We live in an age in which this notion seems to be guided not so much by the values that the subject intrinsically perceives as good, but rather by the demands of the subject. Universality is thus no longer deduced by something that is objectively given, within the shared praxis. Conversely, what seems to have to be universal is what we want to be valid for everyone.
This volume will be of interest to those currently engaged in research or studying in a variety of fields including Philosophy, Politics and Law.

1. Jacques Maritain and the Renewal of the Philosophy of Human Rights – Michel Fourcade

6. In What Sense Are Human Rights Universal? – Maurizio Manzin

7. Religions and the Universality of Human Rights – Alfredo Luciani

10. Between Phronesis and Episteme: Jacques Maritain’s Proposal on Secularism and Updating it for Contemporary Public Debate – Giancarlo Marcocci

12. An Education in Rights Through the Practice of Duties. A Fragment of Philosophy of Education – Luca Di Donato

After graduating in Philosophy from the Catholic University of Milan, Italy, Luca Di Donato began working with people with disabilities in the State Professional School B. Cavalieri, Italy. At the same University, he also collaborates with the chair of General Pedagogy and works with Petite Cercle Maritain, a multidisciplinary research group linked to the Institut International J. Maritain. Di Donato has also edited an Italian text on the epistemology of J. Maritain, Scienza e realtà. Introduzione alla logica materiale (Morcelliana, 2015).

Elisa Grimi is Executive Director of the European Society for Moral Philosophy, the Editor-in-Chief of the international journal Philosophical News and Project Manager of philojotter.com. In 2014, she received the Paolo Michele Erede Foundation First Prize with a work on 'Politics and Network'. She has studied and worked at various universities throughout the world, in countries including Italy, Switzerland, Austria, Germany, England, France and the United States. She is the author of numerous publications, including her first Italian monograph G.E.M. Anscombe: The Dragon Lady (Cantagalli, 2014) with direct testimonies, G.E.M. Anscombe. Guida alla lettura di Intention (Carocci 2018), co-author with Rémi Brague of Contro il cristianismo e l'umanismo. Il perdono dell'Occidente (Cantagalli, 2016), editor of the collection Tradition as the Future for Innovation (Cambridge Scholars Publishing, 2016), and of the Dossier La philosophie de l'humilité (Recherches Philosophiques, ICT, 2017).