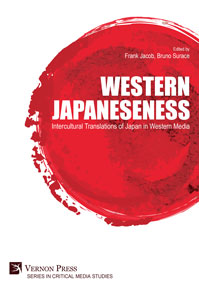 Hardback
$ 44
Availability: In stock
also in E-book $ 75 , Paperback $ 34
currency displayed based on your location
(click here to change currency)

Our images of non-Western cultures are often based on stereotypes that are replicated over the years. These stereotypes often appear in popular media and are responsible for a pre-set image of otherness. The present book investigates these processes and the media representation of otherness, especially as an artificial construct based on stereotypes and their repetition, in the case of Japan. 'Western Japaneseness' thereby illustrates how the Western image of Japan in popular media is rather a construct that, in a way, replicated itself, instead of a more serious encounter with a foreign and different cultural context.

This book will be of great value to students and academics who hold interest in media studies, Japanese studies, and cultural studies. It will also appeal to a broader audience with interests in Japan more generally.

Chapter 3 The Poetry of War: Jarmusch’s Ghost Dog and the Reinvention of the Code of the Samurai in a Contemporary Key
Remo Gramigna
University of Turin, Italy

Frank Jacob is Professor of Global History at Nord Universitet, Norway. He is the author or editor of more than 70 books, and his fields of research include modern German and Japanese History, Military History, and the comparative history of revolutions.

Bruno Surace holds a Ph.D. in Semiotics and Media from the University of Turin, where he is Adjunct Professor in Semiotics, Research Fellow and member of AISS (Associazione Italiana Studi Semiotici), CUC (Consulta Universitaria Cinema) and CIRCe (Centro Interdipartimentale di Ricerca sulla Comunicazione, Turin). He has written articles for numerous peer-reviewed journals, participated in European summer schools, and given lectures in conferences and seminars in Italy, various places in Europe and China. In spring 2017, he was a Visiting Scholar at UCC (University College Cork, Ireland) in the department of Film and Screen Media.