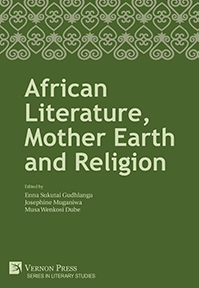 Hardback
$ 65
Availability: In stock
also in E-book $ 77 , Paperback $ 41
currency displayed based on your location
(click here to change currency)

This book is a collection of essays that explore the intersection of Earth, Gender and Religion in African literary texts. It examines cultural, religious, theological and philosophical traditions, and their construction of perspectives and attitudes about Earth-keeping and gender. This publication is critical given the current global environmental crisis and its impact on African and global communities. The book is multidisciplinary in approach (literary, environmental, theological and sociological), exploring the intersection of African creative work, religion and the environment in their construction of Earth and gender. It presents how the gendered interconnectedness of the natural environment, with its broad spirituality and deep identification with the woman, features prominently in the myths, folklores, legends, rituals, sacred songs and incantations that are explored in this collection.

Both male and female writers in the collection laud and accept woman’s enduring motif as worker, symbol and guardian of the environment. This interconnectedness mirrors the importance of the environment for the survival of both human and non-human components of Mother Earth. The ideology of women’s agency is emphasised and reinforced by ecofeminist theologians; namely those viewing African women as active agents working closely with the environment and not as subordinates. In the context of the environmental crisis the nurturing role of women should be bolstered and the rich African traditions that conserved the environment preserved. The book advocates the re-engagement of women, particularly their knowledge and conservation techniques and how these can become reservoirs of dying traditions. This volume offers recorded traditions in African literary texts, thereby connecting gender, religion and the environment and helpful perspectives in Earth-keeping.

Preface: Going back to the first sentence of our childhood … once upon a time
Tinyiko Maluleke
University of Pretoria, South Africa

Section A: The woman, environmental conservation and folk art

Section B: Mother as metaphor: representations of the earth and the natural environment

Enna Sukutai Gudhlanga holds a Doctor of Literature and Philosophy in African Languages from the University of South Africa. She is an Associate Professor and Chairperson of the Department of Languages and Literature at Zimbabwe Open University. Her research interests are gender in literary and cultural studies. Gudhlanga holds certificates in Gender Mainstreaming from OSSREA, CODESRIA and UNIDEP. She is also a research fellow at the University of South Africa and is a member of the Circle of the Concerned African Women Theologians.

Josephine Muganiwa is a Senior Lecturer in the Department of English (University of Zimbabwe) and expert in African and European literatures. Her research interests include gender, religion, and culture in literature. She holds a Doctor of Literature and Philosophy (English) from the University of South Africa and certificate in Gender Mainstreaming from OSSREA. She is also a budding scholar of the Circle of the Concerned African Women Theologians.

Musa Wenkosi Dube is a Professor of New Testament Literature in the Department of Theology and Religious Studies at the University of Botswana. She is a Humboldtian awardee (2011) and is the current continental Coordinator of the Circle of Concerned African Women Theologians (2019-2024). Dube holds a PhD in New Testament Studies from Vanderbilt University, USA. Her research interests include gender, postcolonialism, translation, and HIV and AIDS studies. Her research has been supported by awards from the John Templeton Foundation and the National Institutes of Health among others. Dube is the 2017 winner of the international Gutenberg Teaching Award. She is also a research fellow at the Department of Religion and Classical Studies, University of South Africa. She has consistently researched and published on gender and religion.