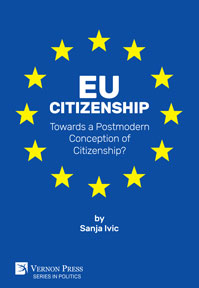 Hardback
$ 59
Availability: In stock
also in E-book $ 90 , Paperback $ 51
currency displayed based on your location
(click here to change currency)

The modern liberal idea of citizenship is constructed by a fixed notion of identity which gains meaning through a number of binary oppositions, such as we/ they, citizen/ foreigner, self/ other and so forth. Defined by these binaries, where the first term is perceived as dominant because it is considered to be derived from reason, the fixed notion of identity inevitably produces exclusion and marginalization. Importantly, the postmodern concept of citizenship stems from a critique of these essentialist and universalist conceptions of identity.
Exploring European identity and European citizenship from a philosophical perspective, this book reveals the discursive construction of these two concepts whilst at the same time attempting to define them as either modernist or postmodernist categories. Dr. Ivic takes a hermeneutic approach in her interpretation of European citizenship and identity through a close reading of European treaties and other official documents. Through her detailed analysis, Dr. Ivic is able to present the reader with well-informed and concrete examples of modern and postmodern concepts of identity within Europe. Moreover, this book explores the impact that contemporary issues such as Brexit, the migration crisis in Europe, and the proliferation of nationalist discourses, have on European citizenship and identity.
Where existing research literature has failed, this book offers a dynamic and textual analysis of citizenship that takes into account the complex philosophical, legal, political and theoretical background of Europe. Dealing with issues that have not yet been sufficiently explored, ‘EU Citizenship’ is an important contribution to the field of philosophical analysis. Aimed at university students, this book will also provide a baseline and set of reference points for researchers and practitioners of European studies that are working with projects that look at European citizenship.


CHAPTER 1
CONCEPTS OF CITIZENSHIP AND IDENTITY: NATIONAL vs. POSTNATIONAL PARADIGMS

Introduction
1. Ethnicity, Nationality and Citizenship
2. Universalist Conception of Citizenship
3. Politics of Identity
4. The Emergence of European Idea of Subjectivity
5. Citizenship as Discursive Practice: Postmodern Concept of Citizenship[
6. Globalization and Postnational Model of Citizenship

CHAPTER 2
THE EUROPEAN UNION AS A POSTNATIONAL POLITICAL COMMUNITY

Introduction
1. Different Paradigms of the Idea of “Europe” and “European Citizenship”
2. The European Union: Towards the Postmodern Political Community
3. The Spiritual and Cultural Dimension of Europe
4. The Question of European Identity in the Light of Brexit and Europe’s Migration Crisis

Dr. Sanja Ivic is Associate Research Fellow at the Institute of Applied Ethics, University of Hull (UK), and a Research Fellow at the Institute for European Studies, Serbia. She completed her Postdoctoral research at the University of Paris 10, France. She is a member of Editorial Boards of three peer-reviewed international journals: International Law Research (Canada), American International Journal of Contemporary Research (USA) and Journal of Law and Conflict Resolution (Africa). She also cooperates with various international scientific institutes and teams. She was a member of Steering group of the project “Pluralism, Inclusion, Citizenship” (the United Kingdom) and she is currently a Board Member of the International Society for Philosophers. Her publications include books and articles on various subjects in the fields of philosophy and European studies. Her book European Identity and Citizenship: Between Modernity and Postmodernity was published by Palgrave Macmillan in 2016. Her book Paul Ricoeur’s Idea of Reference: The Truth as Non-Reference will be published by Brill in 2018.