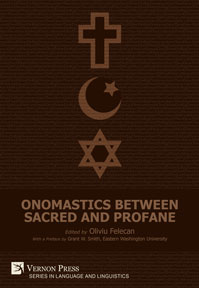 Paperback
$ 60
Availability: In stock
also in Hardback $ 68 , E-book $ 106
currency displayed based on your location
(click here to change currency)

[...] A significant advantage of the volume is a variety of approaches and interpretations of onomastic material within the framework of the sacred/the profane. [...] As regards the contents of the volume, a notable contribution is made to understanding the notions of the sacred and the profane as such and with reference to onomastic realm. [...]

Religiously, God is the creator of everything seen and unseen; thus, one can ascribe to Him the names of His creation as well, at least in their primordial form. In the mentality of ancient Semitic peoples, naming a place or a person meant determining the role or fate of the named entity, as names were considered to be mysteriously connected with the reality they designated. Subsequently, God gave people the freedom to name persons, objects, and places. However, people carried out this act (precisely) in relation to the divinity, either by remaining devoted to the sacred or by growing estranged from it, an attitude that generated profane names. The sacred/profane dichotomy occurs in all the branches of onomastics, such as anthroponymy, toponymy, and ergonymy. It is circumscribed to complex and interdisciplinary analysis which does not rely on language sciences exclusively, but also on theology, ethnology, sociology, psychology, philosophy, anthropology, geography, history and other connected fields, as well as culture in general.

Despite the contributors’ cultural diversity (29 researchers from 16 countries – England, Finland, Germany, Hungary, Italy, Japan, Jordan, Kenya, Nigeria, Poland, Romania, Russia, South Africa, Spain, U.S.A., and Zimbabwe – on four continents) and their adherence to different religions and faiths, the studies in Onomastics between Sacred and Profane share a common goal that consist of the analysis of names that reveal a person’s identity and behavior, or the existence, configuration and symbolic nature of a place or an object. One can state that names are tightly connected to the surrounding reality, be it profane or religious, in every geographical area and every historical period, and this phenomenon can still be observed today. The particularity of this book lies in the multicultural and multidisciplinary approach in theory and praxis.

Part One:
Onomastic Theory. Names of God(s) in Different Religions/Faiths and Languages

Davide Astori, Planning the Name of God (and the Devil). A Short Route, between the Sacred and the Profane, in Linguistic Creativity. Looking for Some Constant Logical Primary Pattern

Daiana Felecan, Theoretical Outlook on the Sacred and the Profane in First Names

Artur Gałkowski, Names of Sects: Between the Unusual and Manipulation

Bertie Neethling, The Deity Concept among the amaXhosa of South Africa

Ephraim Nissan, Some Considerations on Jewish Names of Monotheism’s Only Deity

Roman Razumov, Sergey Gorajev, Restoration of Urbanonyms with Sacred Allusions in the System of Urban Object Names in the Russian Language of the End of the Twentieth and the Beginning of the Twenty-First Century

Joan Tort Donada, The “Profane” and the “Sacred” in the Major Toponymy of the Ebro River Basin (Spain)

Mariann Slíz, Tamás Farkas, Connections of the Sacred and Profane in the History of Hungarian Given Names

Angelika Bergien, Sacred Aspects of Names in the Context of Place Branding

Paula Sjöblom, The Influence of The Kalevala on Finnish Commercial Naming

Part Five:
Literature and Onomastic Wordplay between Sacred and Profane

Alina Bugheșiu, Semantics of Names of Tarot Cards between Sacred and Profane

Ephraim Nissan, Onomastic Wordplay in Roman-Age to Medieval Rabbinic Biblical Exegesis, and Beyond

Oliviu Felecan is Prof. Dr. Hab. in the Faculty of Letters at the Technical University of Cluj-Napoca, Romania. Following his PhD dissertation in Philology (West University of Timişoara, 2004), Dr. Felecan has written widely on the field of onomastics including three books as author (The Concept of “Work” – A Sociolinguistic Perspective in Diachrony – 2004; The Romanian Language in European Context – 2009; An Onomastic Excursion into Contemporary Romanian Public Space – 2013), three books as co-author (& Nicolae Felecan: The Latin Language. Grammar and Texts – 2007, 2008; Annotated Everyday Dictionary of Latin Abbreviations, Phrases, Maxims and Quotations – 2007; Multum in parvo. Annotated Latin Phrases and Quotations – 2013, 2018), eleven volumes as (co-)editor, and over one hundred studies (in journals, proceedings, and books from 15 countries). He has managed two research projects,“Multiethnic Connections in the Anthroponymy of Maramureş, a Central European Area” (2009–2011) and “Onomastics in the Contemporary Romanian Public Space: Socio- and Psycholinguistic Research” (2010–2013), and has organized the four editions of the International Conference on Onomastics “Name and Naming”.