In the tradition of a decade of bi-annual gatherings of the International Symposium on Poetic Inquiry, this volume serves as the fifth refereed symposium anthology. Enchantment of Place celebrates poetry and poetic voices—theorizing and exploring poetic inquiry as an approach, methodology, and/or method for use in contemporary research practices. Poetic inquiry has increased in prominence as a legitimate means by which to collect, assimilate, analyze, and share the results of research across many disciplines. With this collection, we hope to continue to lay the groundwork internationally, for researchers, scholars, graduate students, and the larger community to take up poetic inquiry as a way to approach knowledge generation, learning, and sharing. This volume specifically works to draw attention to the ancient connection between poetry and the natural world with attention to broadening the ecological scope and impact of the work of poetic inquirers.

Showing and Telling is the first academic work to explore how publicly funded film heritage institutes account for their mandate in their public activities. It does that by inspecting and evaluating public presentations and visitor information about these presentations. The research was done by juxtaposing two complementary approaches. The first is grounded in the author’s experience as a collection researcher and curator and makes a case for the richness of archival objects usually ignored for their lack of aesthetic qualities. The second is a survey of the public activities of 24 institutes worldwide, based on their websites, in February 2014; the latter constitutes a unique source. This original work uncovers the disconnect between the curatorial activities of these institutes and their missions. A central finding is that publicly funded film heritage institutes give their public an inadequate sense of cinema history. By and large they offer a mainstream-oriented repertoire of presentations, overwhelmingly consisting of feature fiction; they show a disproportionate amount of recent and new works, often through commercial distribution; their screenings consist of an unexplained melee of technological formats (sometimes substandard); and their presentations monotonously frame film as art, although their professed aesthetics are mostly of a cinephile nature and rest on received opinion. Specific materials, early cinema in particular, and specialist knowledge, both historical and methodological, are largely restricted to their network of peer communities. Wholesome transfer of full knowledge, in word and image, to the public is not a major concern. Showing and Telling concludes with recommendations for curatorial activities. Firstly, with a conceptual apparatus that allows a more complete understanding of film heritage and its histories. Secondly, with a plea for rethinking the institutes’ gatekeeper function and for developing more varied, imaginative, and informative public presentations, both on site and online, that reflect the range of their collections and their histories. 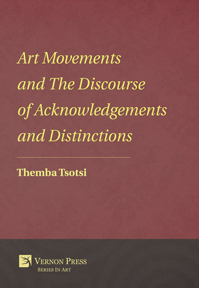 This is a work of critical theory in the deconstructionist tradition. It investigates the impact and role of visual art practice in cultural dispensation. Its central argument is that conceptions of ‘leadership’ and of ‘being a subject’ (or subjugation) play a formative role in the manner with which cultural ideas are appropriated and spread out in organic interactions within the community. The arguments advanced in this work demonstrate that leadership conceptions are disseminated as ‘signs’ (a conceptual term for how ideas and their significance are understood in the context of cultural dispensation) and that signs have historical roots and connotations. Using deconstructionist techniques like différance, this work concretises the critical in the discourse which states that ‘signs’ in the cultural dispensation are in constant interaction with each other in terms of defining their historic, epistemic and contemporary ‘meaning’. The Discourse of Acknowledgements and Distinctions introduces three concepts that account for themselves through the infinite propensities of social contexts and the ‘signs’ that anchor them for referral. These are the notions of Cerebrinity, Hysteridence and Remembrance. The use of psychoanalysis – and of the perspectives of Kristeva, Jung and Freud - distinguishes this book from other works of critical theory that deal with art and art movements. The book aims to illuminate on the propensity of the community to participate in its own subjugation in the context of Modernity. It is concise and incorporates critical theory perspectives by writers like Baudrillard, Lyotard, Kristeva and Spivak. It can be appreciated by art students interested in the intersection between visual art, critical theory and psychoanalysis.