As early as the 19th century, Chilean Spanish has attracted the interest of linguists such as Lenz (1891), who hailed it as an evolving and vibrant language. In more recent times, a number of contemporary linguists have indicated that such a variety of differences exist between Chilean Spanish and other varieties on a number of linguistic fronts. So much so, that it should be considered as an independent dialectal zone in the Spanish-speaking world. Its interest as a case study is reinforced further by the incongruence of the particularly high degree of social variation and the small degree of geographical variation. ‘Chilean Spanish Linguistics: Studies on variation, innovation, contact, and identity’ is the first of its kind, bringing together the work of a diverse and international group of researchers on Chilean Spanish. Through the use of current linguistic methods, theorization, and analyses, this volume examines how language usage, variation, attitudes, identity, and change are uniquely manifested in different aspects of Chilean Spanish and its speakers. Bringing the most current work on Chilean Spanish linguistics to the forefront of the field, this volume will be a valuable resource to all involved in the research and teaching of Spanish language linguistics, language variation, and change, as well as undergraduate and graduate students alike.

This book explores ideas and issues related to second language (L2) speakers and L2 use as portrayed on American television. It examines many examples of television depictions of L2 speakers and L2 use collected in the first decades of the 21st century. The book is divided into four three-chapter sections. “Humor and Homicide” looks at two aspects of the inclusion of L2 speakers and L2 use on television: L2 use or speakers depicted to create humor in various ways, especially through miscommunication or misunderstanding, and L2 knowledge used to solve crimes in the detective/police procedural genre. The section describes the reasons behind these phenomena, how they work, and the messages they convey to viewers. “Language Learning” explores how both adult and child language acquisition is represented and misrepresented on American television, with analysis of realistic vs. non-realistic depictions. “Subtitles and Stereotypes” explores the ways in which L2 speakers are often negatively depicted on television, their portrayal based on stereotypes. This work specifically investigates the role that subtitles play in leading viewers to such conclusions, employing the idea of language subordination, a process that devalues non-standard language while validating the norms and beliefs of the dominant group. Also considered are ways in which stereotypes are sometimes used to undermine negative perspectives on L2 speakers. “Language Attitudes and Mediation” evaluates depictions of second languages used as tools of mediation in both historical and satirical terms as well as the feelings these portrayals engender in viewers. In short, this work asks questions that have not previously been posed about L2 use on television, and it provides answers that not only shed light on issues of the representation of language learning and language use, but also constitute a lens through which American society as a whole might be understood. 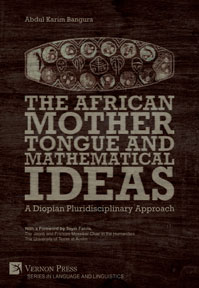 This book by renowned scholar Dr Abdul Karim Bangura combines linguistics and mathematics to show how and why African-centred mathematical ideas can be a driving force in Africa’s development efforts. Bangura explores the concept that Africa has been the centre of the History of Mathematics for thousands of years, as the civilizations that emerged across the continent developed contributions which would enrich both ancient and modern understanding of nature through mathematics. However, scholars and other professionals working in the field of mathematics education in Africa have identified a plethora of issues in carrying out their tasks. This is highlighted by one of the most compelling arguments in the book, which is that a major reason for these problems is the fact that the African mother tongues has been greatly neglected in the teaching of mathematics in the continent. Bangura asserts that a change has to be made in order for Africa to benefit from the exceptional opportunities mathematics offer, showing that, even if there is a great body of work connecting linguistics and mathematics, few analyses have been performed on the link between African languages and mathematics—and the ones that have been made are not theoretically-grounded on linguistics. Thus, the book begins by identifying the objects of study of linguistics and mathematics, and delineates which ones they have in common. Next, since the object of study of linguistics is language, the nine design features of language are employed to examine each of the objects as it pertains to African languages. After that, mathematical ideas of sustainability and those of tipping points are suggested as means to help Africa’s development efforts. 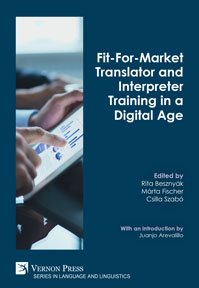 Fit-For-Market Translator and Interpreter Training in a Digital Age

Training institutions offering specialized translation and interpreting programs need to keep up with the rapid development of digitalization and the increasingly sophisticated requirements of the language industry. This book addresses digital trends and employability in the market from the aspect of training: how have the latest digital trends shaped the language industry, and what competencies will translators, interpreters and T/I trainers need so as to meet current market requirements? Four major subjects of high relevance are discussed in 12 chapters: (1) collaborative partnership in the field of fit-for-market practices with a focus on e-learning materials; (2) competence development in translator and interpreter training; (3) the implications of neural machine translation and the increasing significance of post-editing practices, as well as (4) the role of new technologies and new methods in the work and training of interpreters and translators. With an introduction written by Juanjo Arevalillo, managing director of Hermes Traducciones and former vice-president of the European Union of Associations of Translation Companies, the book creates a fresh momentum for researchers, academics, professionals and trainees to be engaged in a constructive dialogue.